Right is that title kind off, could be, might be confusing? Basically anything not written by Cave or co-written with his band members. So after earlier today the new Bad Seeds song Jesus Alone which I still don’t know what to say about it, this new album Skeleton Tree might just be the most amazing thing he’s ever done. I’ve got the next Cave post, I love covers if you haven’t been able to tell yet. Some other artist doing someone else’s track I find very interesting and entertaining. Cave has done a few in his time but here’s my ten favorites together in one place.

So the main pic is worried looking Cave in the studio with Johnny Cash, he wrote in last year’s The Sick Bag Song book:

“In a studio in Malibu, Johnny Cash sat down and played a song. He was partially blind and he could barely walk. I was there. I saw a sick man pick up his instrument and be well.”

I have to say I love the other song they played that day, Hank Williams’ I’m So Lonesome I Could Cry was the one that ended up on the album. The outtake on the Unearthed box-set from all those sessions is the one I like the very best. The story goes that producer Rick Rubin asked Cave to write a song for Cash’s first album Rubin was going to do with him. He sat down thinking it was for Johnny and wrote Nobody’s Baby Now but it was too good to give away even to Cash. Nobody’s Baby Now ended up on The Bad Seeds’ Let Love In album. Rubin and Cash covered The Mercy Seat on a later album and then just invited Nick to sing a duet with Johnny. Rick told Nick to pick any song and they with have it really on the day to record. Cave don’t known what the hell to sing with his hero, did you know Nick Cave grew-up small town country Australia and he loved watching The Johnny Cash Show on the TV as a kid. Anyway he goes to talk to Warren Ellis because he doesn’t know what song to sing, Ellis just says “Just pick any song man, that one will do” pointing the stereo and Hank Williams was playing at the time. Once in the studio Johnny wanted to do another track with Nick and it was Cindy. That’s just got to be my number one here and it’s one of three Traditional songs that are in my list.

Then comes a Bobby Dylan one from the Murder Ballads album with some friends singing too. Next that True Detective soundtrack song written by Larry Gatlin and one of the only few tracks Cave’s ever recorded in USA, recording with T Bone Burnett too. The John Lee Hooker one from the Lawless soundtrack. George Harrison/The Beatles which was the single also including his Let It Be cover from the I Am Sam soundtrack. A Tradition song from The Harry Smith Project Anthology of American Folk Music Revisited which another one of the few he’s record in USA. Yet another Tradition song you can find on The Bad Seeds’ B-Side & Rarities from 2005 but the band is Mick Harvey, Tracy Pew which is pretty much almost all of The Birthday Party but Hugo Race is playing guitar. Leo Cohen‘s track is a fave that didn’t make the cut onto the album/soundtrack at the time but all those ones would be his first recordings at his home now in Brighton. The Nancy Sinatra & Lee Hazlewood Boots is one of his earliest recording and just can’t help but to included his first ever video clip too, originality record for comp album of new Aussie bands called Lethal Weapons which also included two early Cave penned tracks Boy Hero and Masturbation Generation. Finishing with song written by George Douglas & George David Weiss, first recorded by Louis Armstrong, ending my ten with Cave dueling with old mate Shane MacGowan. 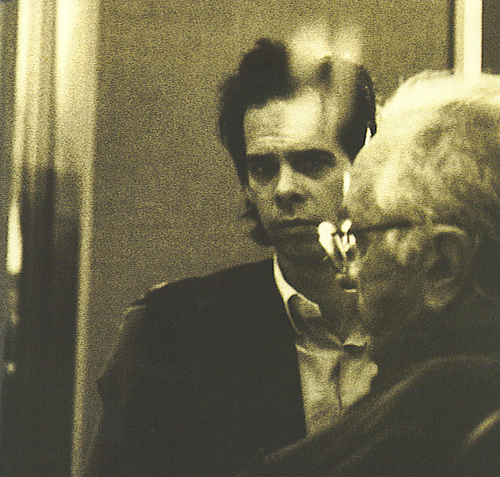 So everybody what did I miss? What’s your fave Cave cover?